Before a church was built in this town, the early Lutherans of Elizabethville either met in private homes or became members of St. John’s Church near Berrysburg.

In 1834, a plan was proposed which would include St. John’s with the Sunbury Parish. Our ancestors were part of the vocal minority objecting to this plan. The Rev. John Nicholas Hemping was assigned by the Danville Conference of the Evangelical Ministerium of Pennsylvania to resolve the split which had developed. He formed new congregations at Elizabethville, Rife, Pillow, and Gratz. By 1843 Rev. Hemping’s parish consisted of Stone Valley, Pillow, Elizabethville, Hubers (Red Cross), Fetterhoff’s and Millers. He served these congregations until 1850.

By 1870 and for a period of 25 years, St. John’s in Mifflin Township, Simeon’s at Gratz, Salem at Elizabethville, Zion at Rife and St. Jacob’s in Armstrong Valley constituted the Lykens Valley Charge. However, on November 10, 1894, it was decided that this was too large a parish for one minister and a joint meeting of our Church Councils was held at which time a resolution was passed dissolving the Lykens Valley Charge. As a result of the dissolution, a new parish was formed, including Simeon’s, Salem’s, Zion’s and St. Jacob’s congregations, effective January 1, 1895. With Mr. John H. Bonawitz in the chair, Mr. Isaac Swab was elected Secretary and Mr. John Snyder was elected Treasurer. Preaching appointments in each of the congregations were fixed, the pastor’s salary decided upon and apportioned to the congregations, and steps were taken to secure a new pastor of the new Lykens Valley Charge. 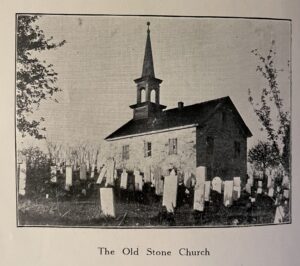 The earliest records of this congregation note that in the year 1835, the citizens of Elizabethville and the surrounding area, having organized themselves into a Christian congregation, built a Lutheran/Reformed Church. Located on the southwest corner of Broad and Bender Streets, it was constructed at a cost of $6200. “The Old Stone Church, as it was familiarly known, was dedicated on September 6, 1835.

The stone used to build the church came from the nearby Berrys Mountain. The main floor was at ground level at the north entrance, with a basement at ground level on the south end. During its earliest years the basement area was used for public school rooms. The steeple and the bell were added in 1866 at the north gable of the roof and overlooked the Lykens Valley. During the same year, the Rev. Jeremiah Schindel, Lutheran pastor, reorganized the Sunday School which became known as Salems Union Sunday School of Elizabethville. It continued under joint operation (Reformed Lutheran) until 1884 when Sunday School “members and property were amicably divided.

Thus, in 1884, the Reformed congregation having constructed its own church, departed from “The Old Stone Church” leaving the Lutheran congregation in sole possession. 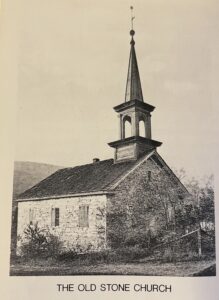 In 1887 the Lutherans decided to erect new brick church building at its present site on the north side of West Main Street. At the time the congregation consisted of 57 members.

The land was given to the congregation by the daughters of Adam Q. Bender. Ground was broken May 25, 1887; the cornerstone was laid September 18, 1887. In July of 1888 the cross was placed on top of the steeple, which had been made at the Swab factory by Isaac and Jonas Swab. The bell, which was removed from the belfry of “The Old Stone Church” was installed in the steeple. Although the Sunday School room was first occupied in 1888, the nave and sanctuary were not completed and consecrated until November 16, 1890. Total cost was about $9000. Gas lights were installed in the church in 1907.

Through the donation of Mr. Jonas Swab, the west wing was added to the church in 1913. The congregation equipped the basement for Sunday School rooms, installed a two manual water powered Moller pipe organ in the wing and added a library room on the east side of the pulpit recess. Other renovations included pews in the gallery, a new heating plant, and outside painting. Total cost for the project was $3575.

In 1926 organ chimes were installed and in 1929 new doors with artistic beveled glass were installed. During the years 1933 and 1934 a new heating plant was installed and the basement was enlarged as a parish room with all labor donated by members of the congregation. In October 1941 the present Moller, Opus 7026, 8-rank pipe organ was completed and installed at a cost of $3000. Other church interior renovations were undertaken during 1941, 1963, and 1975.

During 1947 carillonic bells were installed and dedicated to the honor of all members of the congregation who served in the armed forces during the wars. In 1954 the belfry and steeple were completely rebuilt with a new cross mounted thereon. In 1956 land was purchased on West Broad Street and macadamized for use as a parking lot. Folding doors were installed in the parish room in 1965, providing six separate classrooms.

On September 14, 1980 an organ rebuilding fund was initiated with a goal of $42,000. The rebuilding included re-voicing and the addition of several new ranks. The rebuilding was dedicated in November of 1982. The Rev. Suzanne Perez, pastor of Immanuel Lutheran Church, Williamstown, played the dedicatory recital.

In addition to the above major projects, the church has obtained new hymnals, choir gowns, altar vases, new pulpit Bibles and vestments, offering trays and many other items all of which have been given to the glory of God. 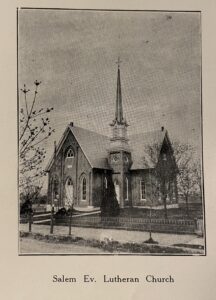